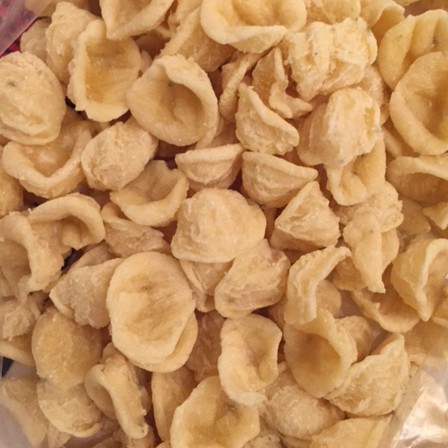 Staying in an airbnb apartment with a kitchen makes it possible, but certainly not easy. There’s usually a limit on pots and pans, useful utensils, bench space and no pantry to speak of.  There’s often barely a kitchen.

The one rule is KISS: Keep It Simple, Stupid.

For example, in the space I’m in at the moment, in rural Puglia, the “pantry” consists of a couple of bits and pieces that sit on top of the range hood (which doesn’t work, and the oven doesn’t either). There is salt, pepper, olive oil (I’m guessing, it’s an unmarked bottle), vinegar and dried rosemary. So if you want to cook something without buying out the supermarket for basics, it has to be simple.

We’re at the end of several weeks of travelling and, much as I love eating in restaurants, I really need to eat something else. It should have lots of vegetables and not be overloaded on salt and fat.

So this is about cooking in difficult and limited circumstances, but still inspired by local dishes. I’ve cooked a few things along the way that worked in my meagre cooking circumstances (like mushroom risotto and soup), but this one is my favourite because it made such good use of local ingredients.

I first came across a version of this dish in Stephanie Alexander’s A Cook’s Companion – broccoli as a sauce for pasta. It sounded improbable, and I’m not even sure now why I tried it (I probably had an overload of broccoli and was looking for inspiration).  It was very simple: orecchiette pasta (little cups, named after the ears they resemble), broccoli, anchovies and olives, topped with fried bread crumbs (not parmesan).

It was a big surprise. It has become a really popular in our household because it’s delicious and it feels really healthy. I usually use at least a large head of broccoli, for two.

When we got to Bari (in Puglia, southern Italy), we discovered that orecchiette are a local “thing”, and elderly women still sit every day and make it by hand for sale.  And yes, it’s everywhere.

There is also a local version of the broccoli pasta dish that uses a green vegetable we’ve seen in every market, always incredibly fresh – I now know it is called cime di rape, also known as turnip greens/tops (which they are not) or broccoli di rape. It’s quite leafy, a bit bitter and it has small broccoli-like florets.

Every restaurant seems to have a version, but most are remarkably similar to Stephanie’s: orecchiette, greens, often anchovies, often olives, sometimes breadcrumbs, occasionally garlic, all present in different combinations.

I based mine on Stephanie’s recipe and adapted as necessary.

The process: First boil a big pot of salted water (enough to cook the pasta). Chop the greens (I cut the thickest stems small and the leafier ends bigger) and put it in into the boiling water for a couple of minutes.

Then lift the greens out, pour some good extra virgin olive oil over and set aside. (Because this is Italy and because we love the stuff, we’ve been traveling with a bottle of excellent oil).

Put the pasta into the broccoli water and cook. The freshly, lightly dried orecchiette we got locally cooked quickly, but the usual packet lot take 10-12 minutes.

Meanwhile put the anchovies into a hot frypan with a bit of oil (they’ll spit a bit). We usually use a few from a jar, maybe 8-10, but this time we used some larger salted ones from a deli. They needed the spines removed and the salt scraped off. I thought they had a better flavour than the ones from the jar. We used four large anchovies for the two of us. (I did not have a frypan when I made this at the previous apartment, and used a small saucepan).

Once they’ve cooked to the almost melted stage, add in some pitted, sliced olives (depends on your taste, but maybe 20 for two). We used a mix of green and black, but whatever you have will be OK (just not those nasty pre-sliced and pitted black preserved ones).

When the pasta is ready, add the broccoli to the frypan with the anchovies and olives to reheat and pick up the flavours.

Then combine everything with the pasta, mix well and serve.

Because of my lack of facilities, I simply grated parmesan on top (because I think parmesan goes with almost everything), but that’s not the right way to do it, and if I’d had even one frypan at the time, or any reasonable kitchen facilities, I would have gone with the proper topping for this dish.

The proper topping:  At some stage (depending how good you are at handling two frypans at once), get some fresh breadcrumbs (straight out of the food processor, which gives a good texture), and fry them gently until they are golden. Sprinkle this over the top for some interesting crunch.

The result: A delicious, healthy dish that required no pantry and no special implements.