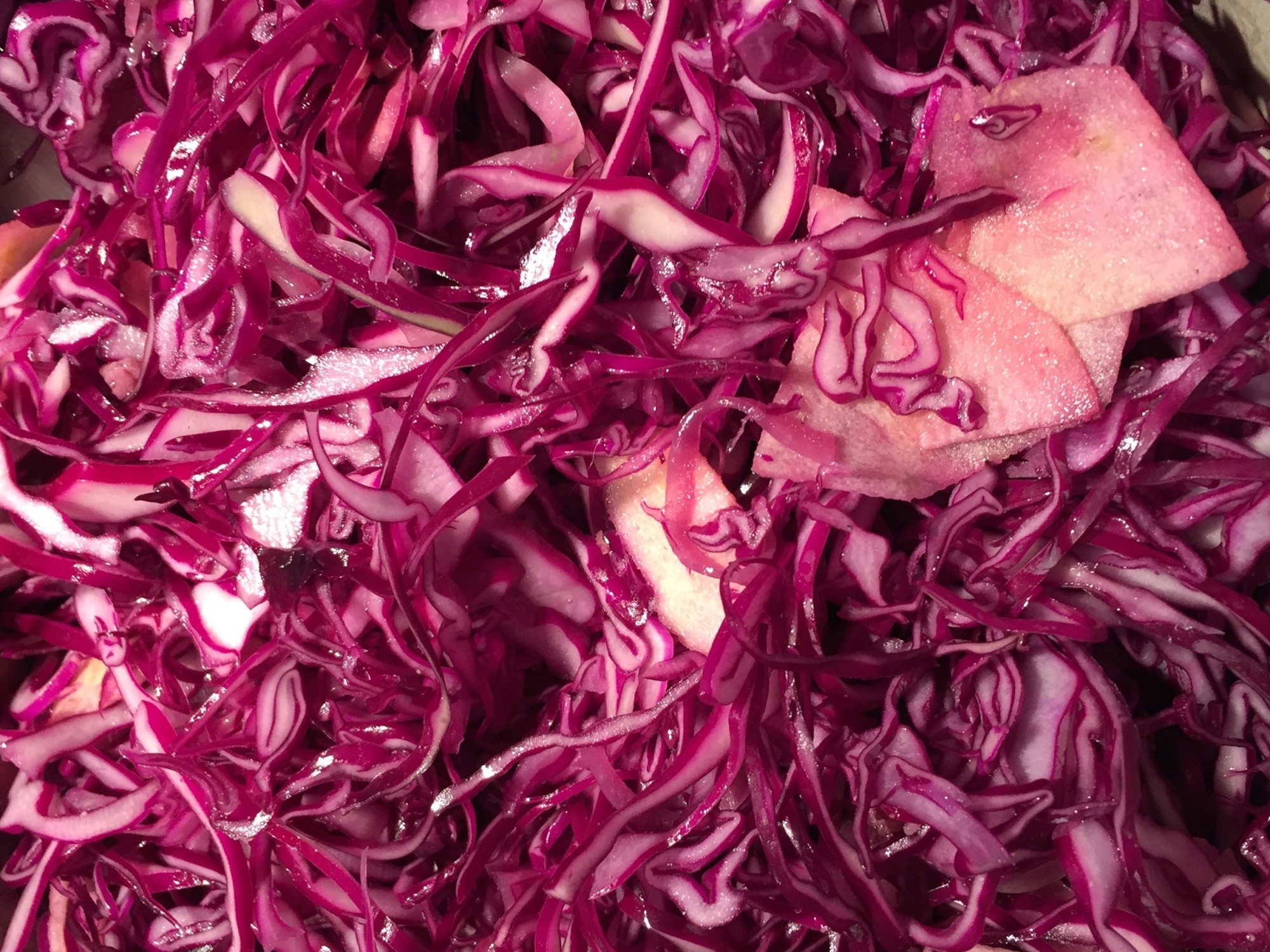 I have a bunch of German recipes that are relics, as well as delicious reminders, of my childhood. They go back as far as I can remember.

Every year we were allowed to choose whatever we wanted as a birthday meal, and every year I wanted the same thing – potato dumplings, red cabbage (rotkohl) and rouladen (a kind of slow-cooked beef roll). I still think it’s the most delicious combination, and all the effort is worth it just for the rouladen gravy.

I cook it only occasionally, since it’s quite a bit of fussing, but they are always special occasions. The full spread will be coming up soon again because I’ve promised one of my nephews I will. It’s been years since I cooked it for him (the last time I did it for all the family was my mother’s birthday at least 10 years ago), and I had no idea he either remembered it or cared, but he made it very clear that both were true and it was time I did it again. Which I will as soon as the renovations are over and the house is fit for visitors again.  (Note: I’m 100 per cent certain that I could leave out the red cabbage bit of that particular German spread, and he wouldn’t notice or care. But that’s not going to happen.)

Today I’m doing just easiest part of that feast meal – the red cabbage – because it will go beautifully with the lamb roast we’re having tonight.

This version is typically German. While there is no single standard recipe, the variations are usually minor. This version was always my favourite, but that’s no surprise, because it’s the one I grew up with. I’ve added a little star anise, but that’s about it.

It has been on my radar all week, since I picked up a beautiful, small red cabbage at Daylesford Market last Sunday. I used the first third in a sauerkraut (more on that soon), and the rest in this.

Red cabbage, the way my mother made it (almost)

In a heavy saucepan:
melt a tablespoon of butter
add 1 tsp of sugar, cook it gently and let it caramelise (the sugar is optional, but it does add a nice flavour). Don’t let it burn.

add a couple of slices of finely diced speck or bacon, stir it through and cook for a couple of minutes (this is optional, it’s adds a nice flavour, but is not essential)
add the sliced onion, stir it through, let it cook a couple of minutes gently, until it softens
add 1/3-1/2 of a cup of red wine (white will also do)
add two fresh bay leaves,  1 star anise (or two or three pieces), 3-4 cloves, a little salt and pepper. If I have juniper berries, I will also put a couple of those in too. Stir well and let it cook a minute or so
add the apples and red cabbage, stir well.

Cover and let it cook gently on a very low temperature for at least an hour, an hour and a half is good, stirring every 10 minutes or so. If it seems dry, add a little water. The apples and onions should add a little sweetness to the final dish.

Variations: There are any number of options for this dish. Adding currants or raisins is delicious. You can substitute red wine or apple cider vinegar or water for all or some of the wine. The vinegar turns it into something a bit more like pickled sauerkraut, which is delicious as well. You can add a lot more apple, making it a bit sweeter. You could put in a little orange zest and juice for some tang. Walnuts might be interesting.

Verdict: the aroma of my childhood.

6 thoughts on “My kingdom for a cabbage”