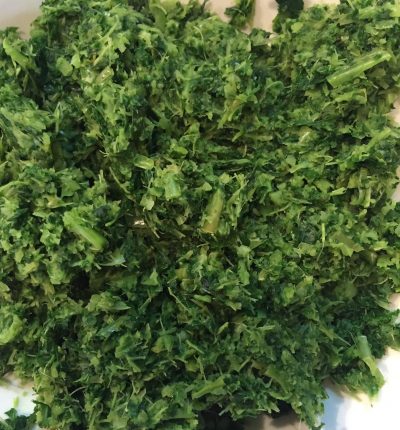 It has been a big week of going out for dinner (for me, anyway). I love going out to eat, but usually keep it to once or twice a week at most. I’m happy to cook, and feel like I’m looking after my health by making that choice most of the time.

But circumstances this week took me out three times (local pub, Rumi, Maha). All of them were great. Rumi and Maha were delicious as usual, and the company in both cases excellent.

But come Sunday, I was craving something simple. With loads of greens.

I came across an interesting recipe last weekend which was a variation on a classic Italian dish. In typical fashion, I tore it out of the Sunday newspaper magazine it appeared in and left it at the end of the table, where it languished all week, waiting for an appropriate moment.

It was an Adam Liaw recipe for an entree dish of spaghetti with spinach and zucchini. And today, as the start of the new season of MasterChef, made it seem an appropriate time to cook it.

With variations, of course.

I had a beautiful big bunch of organic kale, and to me that seemed like a reasonable substitute for the spinach. It was a lot more in quantity than the two cups of spinach in the original recipe, but I was craving greens and that seemed perfect to me. I had no spaghetti in the house, so I used bow-tie pasta instead.

Pasta with kale and zucchini

Get the water boiling for your pasta.

Take a large bunch of kale. Chop the stems and put them in a hot frypan with butter. Let that cook a couple of minutes, and then add the chopped leaves – I cut about 1cm slices right across the bunch. Cook it all until it is well wilted, but still bright green.

Let it cool a little and put in a blender. You will probably need to add a little liquid, since kale is a lot dryer than spinach. The original recipe wanted a puree. I went with something rougher than that, because I like the texture of it and kale is quite hard to get down to a smooth puree.

Put the pasta on to cook.

In the frypan put a little more butter.  Add:
4-5 chopped anchovies
half an onion finely chopped
one clove of crushed garlic

Let it cook gently for a few minutes, stirring occasionally.

When the onion is well-cooked and soft, Add:
2 zucchinis, chopped into fine matchsticks

Cook for a few minutes. Don’t let the zucchini get too soft, you want texture still.

Add the kale back into the frypan to warm up. If you’re a fan of olive oil, as I am, this is a good time to pour some over.

When the pasta is cooked, toss it all together. Add pepper and salt to taste. I keep the pasta quantity low, since too many carbs don’t really agree with me. That has the advantage of putting all the focus on the topping, which also works for me.

Serve with lots of fresh grated parmesan, which goes perfectly with the kale and pasta.

Verdict: exactly what I needed.